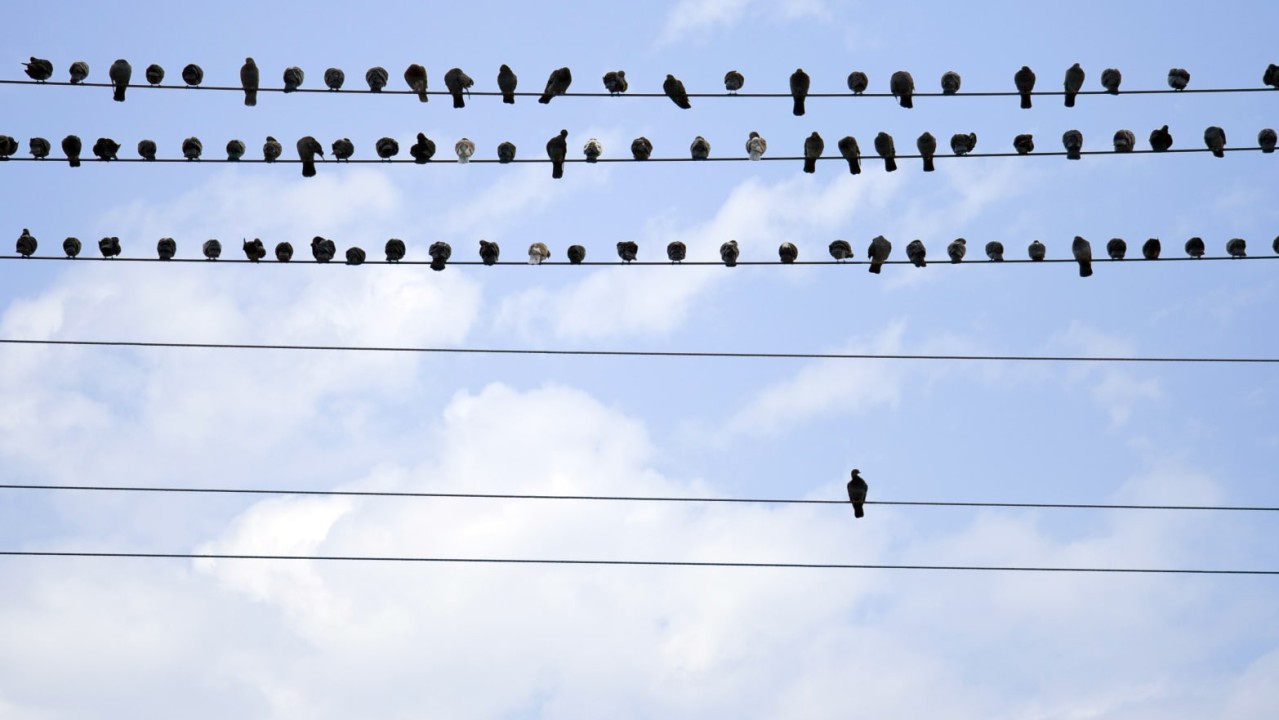 I believe there is…..and for the purpose of this article, addiction is not limited to drugs and alcohol, but is far wider including, eating, sex, shopping, social media, painkillers, , avoidance, self-pity and more, in essence, any compulsive behaviours that are coerced by uncomfortable urges you can’t consciously resist.

If we as leaders could truly understand this, and factor it into our wellbeing strategy and delivery, 2020 could be the year where our measurement of wellbeing reflects the World Health Organisation’s description of:

‘the presence of wellness rather than the absence of illness, where every individual realizes his or her own potential, can cope with the normal stresses of life, can work productively and fruitfully, and is able to contribute to her or his community.

So how have I come to my belief that this correlation exists?

I have been working and speaking on the topic of wellbeing in Australia and Europe for several years, and grappling with the growing amount of energy and resource that is being poured into wellbeing initiatives, and yet the evidence is that organisations are not seeing the expected ‘return’ on investment that they anticipated.

Earlier this year I published an article entitled “Could social wellbeing be a catalyst for improved mental and emotional wellbeing?” and argued that creating social connection could be a ‘Trojan horse’ as a part of a multi- pronged wellbeing strategy, given that it’s a lower cost, soft entry strategy that isn’t as stigmatized as mental health.

My recent research and experience about the correlation between loneliness and addiction and the need for creating social connection has strengthened my view, and is based on four elements:

Loneliness and isolation appear to have hit unprecedented levels in our history, affecting people of all ages:

– In the UK, Tracey Crouch has been appointed as the first Minister for Loneliness, with the task of tackling ‘the Sad Reality of Modern Life’ (Time Magazine 25 April 2018)

– In the USA, former U.S. Surgeon General Vivek Murthy called loneliness a “growing health epidemic” in a Harvard Business Review essay, citing a study that social isolation is “associated with a reduction in lifespan similar to that caused by smoking 15 cigarettes a day.”

In Rachel Wurzman’s TED talk on how isolation fuels opioid addiction she shares her research that loneliness predisposes people to an entire spectrum of physical and mental illnesses, and asks the question, ‘is it any wonder, people in today’s world are becoming addicted so easily.’

Her work has been driven by the opioid crisis which is getting out of control, and her premise is that there is something about the way we treat addiction that is not working.

In her experiments giving medication to mice, they developed an aversion to interacting with other mice. Similarly, with humans, medication given to healthy people interfered with their ability to feel connected to people they already knew and cared about.

This leads to lower levels of oxytocin, the drug that makes us feel happy, loved and more resilient.

She demonstrates that these behaviours are compulsive, as if on autopilot, where the brain triggers the behaviours you have done most often in the past under the same conditions, and it seems to be something out of our control.

In some ways it’s a self-perpetuating cycle, loneliness drives addiction, and addiction drives isolating from others, and often with loneliness, this develops a sense of deep dissatisfaction and we become restless, irritable and impulsive, and we become likely to seek relief from anywhere.

Social connection as a solution

Rachel argues strongly that the cycle can be broken, the brain can be rewired, and one of the best strategies to avoid relapse, is to be of service to each other which lets people connect.

At an individual level, we need to develop and practice social connective behaviours instead of compulsive behaviours when we are lonely.

And this is where organisational wellbeing strategy kicks, in, especially social wellbeing and creating an environment of connection, belonging, community and celebration.

My mantra for a long time has been Alexander Den Heijer’s quote, “ when a flower is wilting, you don’t fix the flower, your fix the garden”, and organisations have a role to play in creating the environment that meets the needs of their people , and in so doing enables wellbeing, work, innovation and happiness.

The opposite of this is to undermine psychological safety.

Back in 2015 I published a Linked In article quoting a 2014 Organisation Sciences research finding which argues that ostracism is even more harmful than bullying and the article contained a list behaviours that go a long way to undermining psychological safety.

Most of the behaviors on that list would fall into the category or isolation and loneliness, and some would even be seen as covert bullying.

Creating an environment that encourage social connection over isolation has been proven to deliver incredible outcomes.

In 2001, Portugal was facing an opioid crisis, and took the bold decision to decriminalize the possession and consumption of all illicit substances, choosing rather than to punish, incarcerate and further isolate offenders, they would be welcomed into society, helped with their rehabilitation, and be provided with opportunities.

Their philosophy is based on principles such as:

– that there’s no such thing as a soft or hard drug, only healthy and unhealthy relationships with drugs

– that an individual’s unhealthy relationship with drugs often conceals frayed relationships with loved ones, with the world around them, and with themselves

Iceland tops the European table for the cleanest-living teens, and they have done it by understanding kid’s brain chemistry. The percentage of 15- and 16-year-olds who had been drunk in the previous month plummeted from 42 percent in 1998 to 5 percent in 2016. The percentage who have ever used cannabis is down from 17 percent to 7 percent. Those smoking cigarettes every day fell from 23 percent to just 3 percent.

In the words of Harvey Milkman, an American psychology professor, people can get addicted to drink, cars, money, sex, calories, cocaine—whatever,” says Milkman. “The idea of behavioral addiction became our trademark.”

This idea spawned another: “Why not orchestrate a social movement around natural highs: around people getting high on their own brain chemistry and give them what they needed to cope better with life: some might crave an experience that could help reduce anxiety, others may be after a rush.

At the same time, the recruits got life-skills training, which focused on improving their thoughts about themselves and their lives, and the way they interacted with other people. “

There’s a degree of vulnerability and exposure in sharing one’s personal stories about the connection between loneliness and addiction, but such is my passion to educate, share and make a difference to others, that I am willing to include it here as my experience of the correlation and my subsequent recovery, drives my vision that social wellbeing can go a long way to being the solution.

I had an addiction to smoking for over 25 years and had spent 20 of those years trying to quit. Having been diagnosed with the early onset of emphysema wasn’t powerful enough to help me with my efforts to stop.

In desperation, I enrolled myself in an offshore residential drug rehabilitation program, to try and find a solution. Surrounded by heroin addicts (who could smoke cigarette’s naturally) I underwent a transformation in my thinking and have been smoke free for two and a half years.

It wasn’t so much the experience of being locked away that was the catalyst for this transformation, but rather the education, that my compulsive smoking had nothing to do with my addiction, and everything was to do with my thinking.

I undertook the 12-step program of Narcotics Anonymous and Alcoholics Anonymous, and for good measure, took the next 12 months off drinking to help me in my smoking recovery.

The reason for sharing my personal story is that my sense of loneliness had driven the ‘compulsive behaviours you have done most often in the past under the same conditions, and it’s something out of our control’ that Rachel Wurzman describes. In fact, many of her suggested solutions align strongly with the principles of the 12-step program.

Many organisations have made this connection and included it in their wellbeing strategy.

NavCanada, have been recognized with an award from the Canadian Mental Health Association (CMHA) for their “Light the way” program.

Their philosophy is to address the entire Wellbeing spectrum, with support for physical, social and mental wellbeing, and to this end make use of both peer-to-peer support as well as traditional EAP support.

In particular, they recognize the correlation between addiction and mental health, as evidenced by their Chemical Dependency Education Rehabilitation Program (CDERP), which encourages engagement with the 12-step program, and they publish educational pieces and personal stories of lives that have been changed.

– More employees are raising their hands to become peers

So, what is the message for leaders?

· Create a clear and all-encompassing definition of Wellbeing that Includes all the sub-elements of Physical, Mental and Social wellbeing

· Make the shift from a compliance/deficit mindset (absence of illness) to a desired and measurable state (presence of wellness), and measure positive indicators

· Start with your leaders, by providing education and resourcing, and then hold them accountable the work ‘environments’ they create

· Create opportunities for social connection and being of service

I trust you have found this article informative and thought provoking, and should you wish to discover more of this thinking, explore case studies and develop hands on tools and strategies, feel free to contact me at pete.jensen@larsenjensen.com

The Three phases of Covid What an emotional roller-coaster ride Covid 19 has been so far. Personal wellbeing, motivation, and productivity during the global pandemic seems to have played out in three … END_OF_DOCUMENT_TOKEN_TO_BE_REPLACED

Want to know the keys to finding and sustaining happiness in your life?

Pete Jensen’s breakthrough book Lessons in happiness from the Third world will reconnect you with proven principles the West has either forgotten, or in our fast paced lives become too distracted to pay attention to.

Packed with real, easy to apply advice, this book will change your emotional, spiritual, and physical a wealth.

END_OF_DOCUMENT_TOKEN_TO_BE_REPLACED

We’d love the opportunity to share more with you about HOW Larsen Jensen can support you in facilitating and harnessing the energy of your people.